To live in the present is to live in a historical moment of extended crisis: from the still unfolding COVID-19 pandemic to the accelerating cataclysm of climate change, from the crisis of political representation in the era of post-truth to racist police violence. The notion of crisis, unlike its colloquial and abundant use may suggest, is not self-referential but rather a deeply contested term that requires mediation and narrativization to obtain political, historical, and cultural specificity. Derived from the Greek verb κρινω [krinô], to separate, judge, choose, it occupies the very threshold of meaning, knowledge, and critique. As anthropologist Janet Roitman asserts, “it is not a condition to be observed [but] an observation that produces meaning;” to designate a particular historical moment, geographic location, or group of people as in/of crisis means to determine what constitutes the norm and what marks its disruption. In this course students learn to think with and about crisis as a critical lens. Embarking from a theoretical consideration of the term and its uses through history, the course proceeds through a curated set of trans-national and trans-historical case studies. Particular emphasis is placed on crisis visuality as a register of perception and interpretation, considering how visual genres of crisis—from data visualizations and photo journalism to visual arts—articulate, sustain, and circulate different understandings of crisis, and invest them with affective urgency and political meaning. 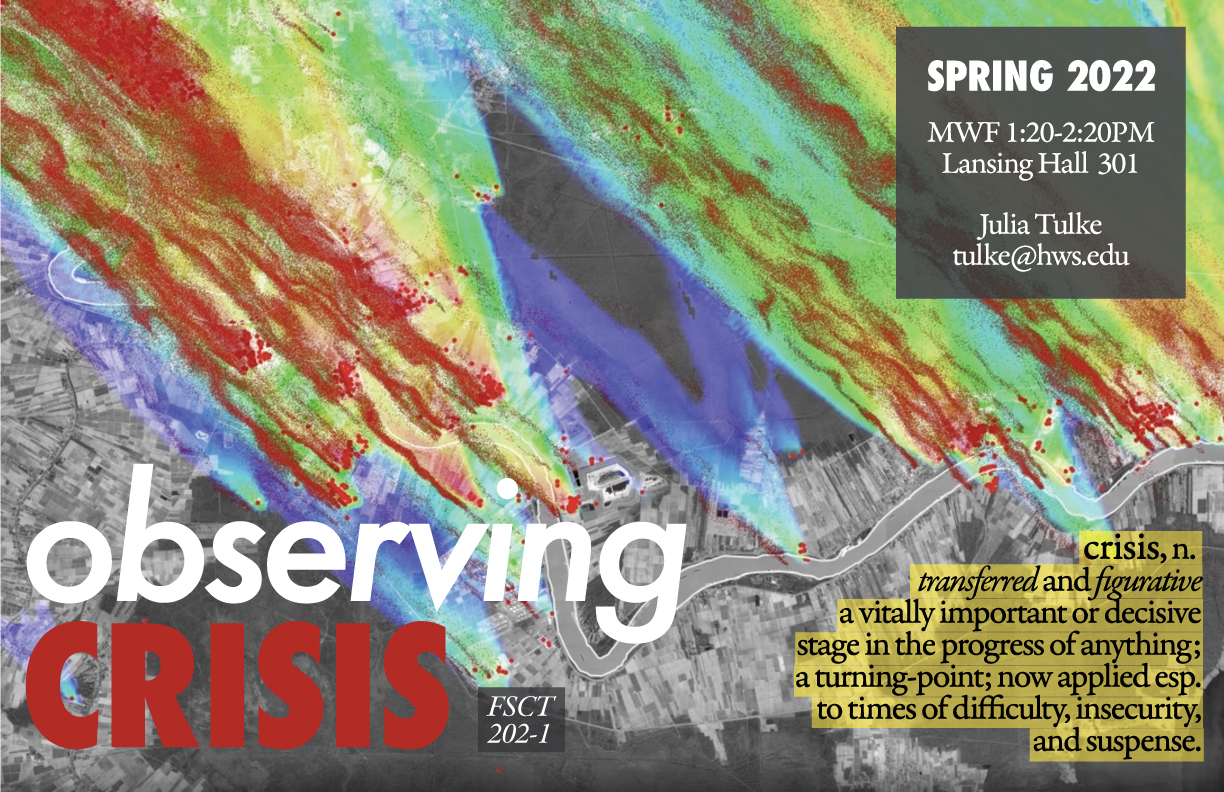 Beyond Banksy: A Critical Introduction to the Study of Street Art and Graffiti (Hobart and William Smith Colleges, Fall 2021 and University of Rochester, Summer 2017)

Despite its rich historical lineages and ever-evolving significance as a cultural practice, popular and scholarly perceptions of graffiti and street art remain firmly grounded in a narrow set of debates (art vs. vandalism), origin stories (graffiti is from New York), and fetishized figures (Banksy). This course departs from such notions, offering a critical introduction to the study of street art and graffiti, understood broadly as self-authorized interventions into public space. Building an interdisciplinary framework grounded in urban studies, anthropology, sociology, art history, and cultural studies, we will consider street art and graffiti as site-specific visual artifacts and as performative practices with the potential to actively transform public space and reimagine everyday life by inscribing alternative possibilities into the surface of the city. Visual objects such as photographic archives, zines, documentaries, and digital collections will form an integral part of the course. Through excursions and guest speakers, students will also be prompted to engage themes and methods discussed in the class within their immediate local context. 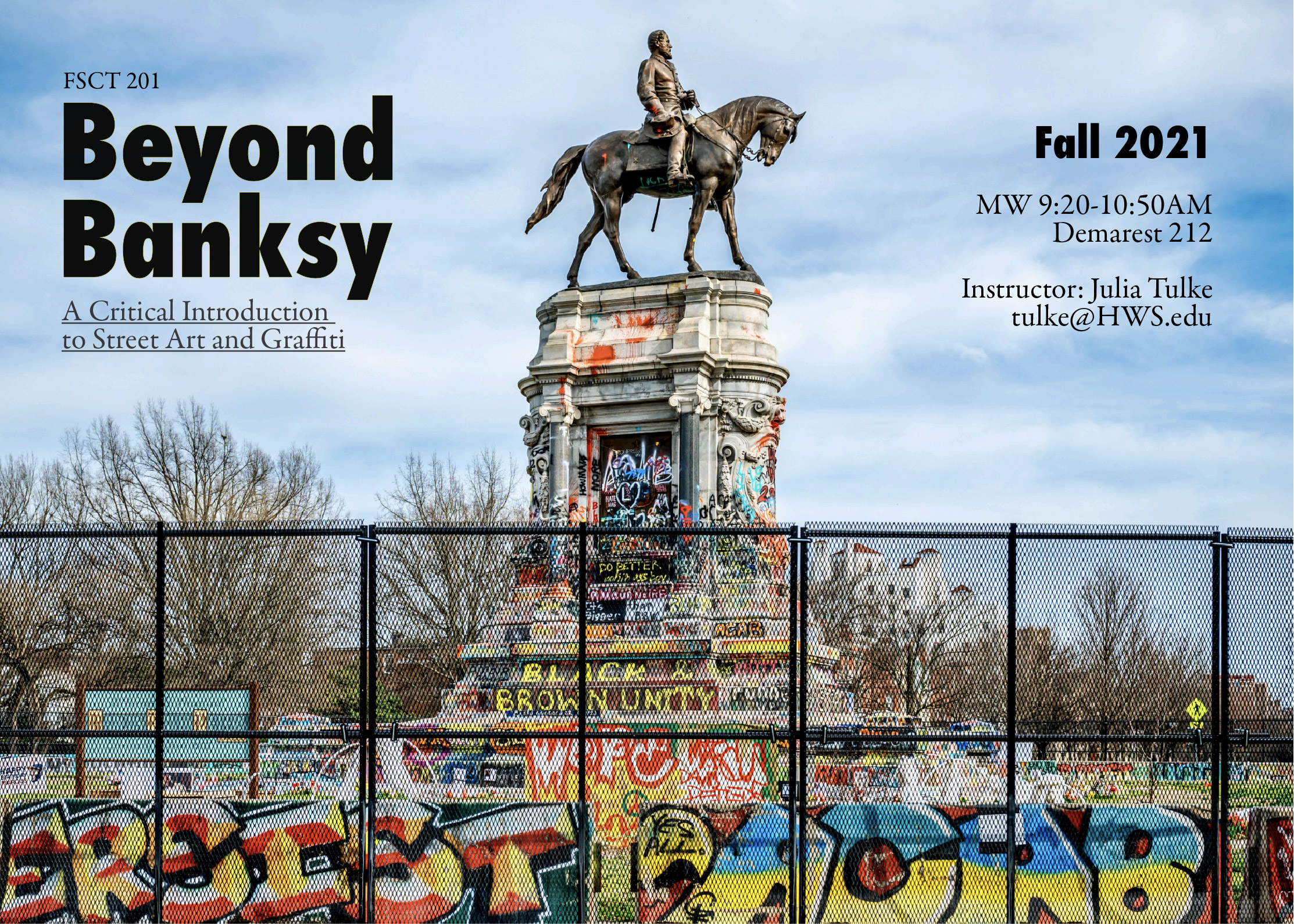 The Politics of Location: Space, Place, and Gender (University of Rochester, Spring 2021)

This course introduces students to the field of gender, sexuality, and women’s studies through the interdisciplinary perspective of space and place. Students will build a critical understanding of the ways in which the social production of space and place and the social construction of gender relations are variously interrelated, manifesting uneven geographies of power that are both symbolic and material. Who gets to belong, to feel “at home,” to “pass” in a certain space (a bathroom, a university, a city, a nation) has everything to do with these processes. Drawing together theoretical texts, cultural artifacts, perspectives from political activism, and student’s own embodied experiences of being in the world this course engages and challenges such regimes of spatial injustice, taking inspiration from feminist and queer strategies of placemaking that subvert, intervene in, and appropriate space.

Interventions: The Aesthetics of Queer and Feminist Protest (University of Rochester, Summer 2019)

This course examines the role of visual and performative practices in queer and feminist social movements, considering how activists make themselves seen and heard through creative forms of protest. Students will engage with a variety of case studies—from AIDS activism to the struggle for reproductive rights, critiques of the heteropatriarchal configuration of the art world to the struggle for queer visibility—considering both material artifacts and performative interventions produced by such movements and investigating their overlap with socially engaged art practices. Visual materials such as photo archives, film, video, zines, flyers, banners, posters, and street art will form an integral part of the course. 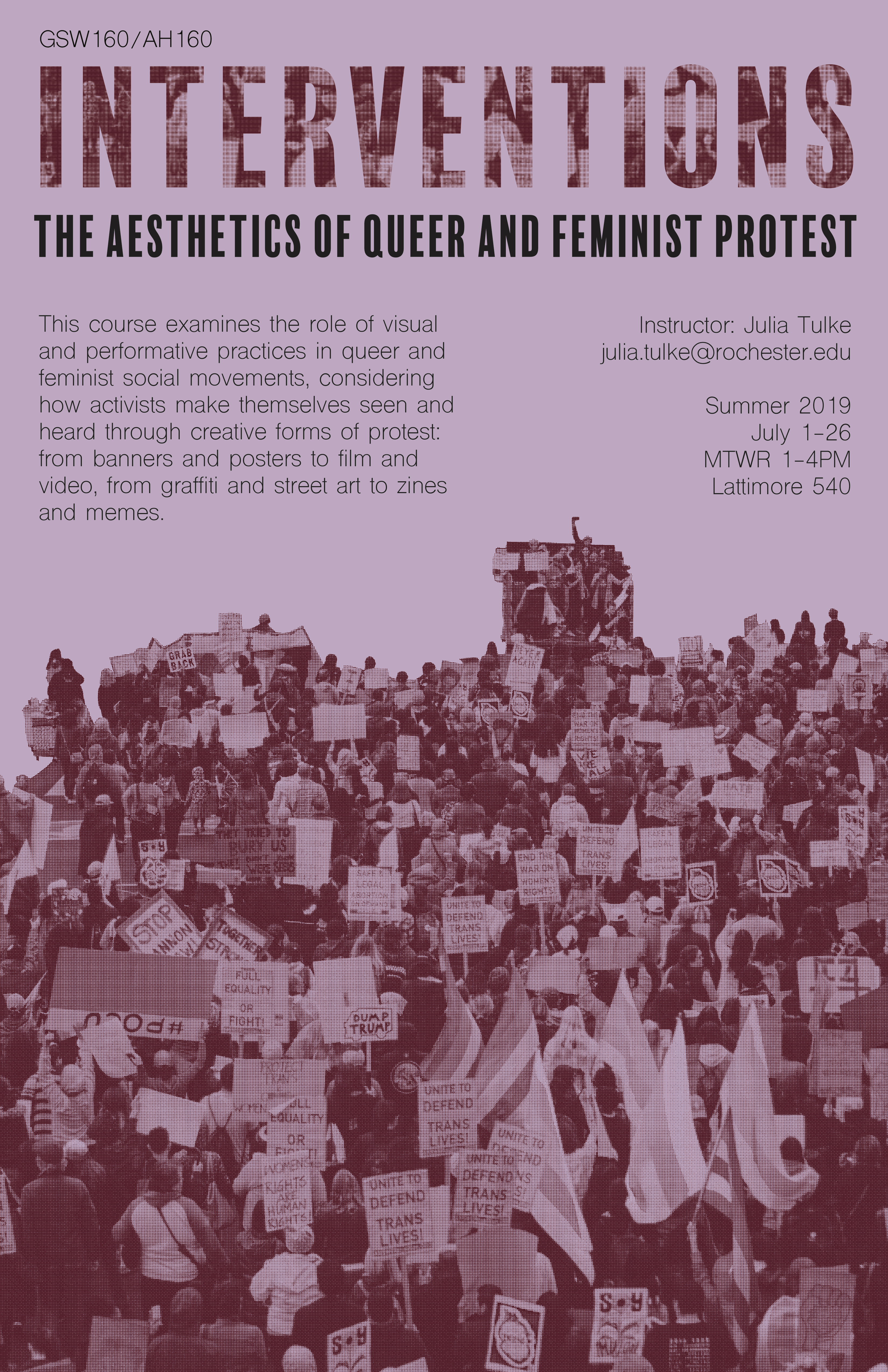